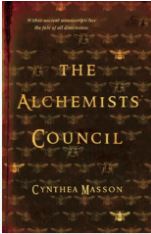 Our main character is Jaden, a young woman who was half-invited, half-dragged to a parallel realm where alchemists regulate the events that happen on earth. Their job is to maintain the world's elemental balance by keeping the Flaw in the Lapis, an infusion of red in an otherwise blue crystal, from getting any bigger. The Flaw allows those who live in the outside world to have free will -- but too much free will, the alchemists believe, and chaos would result. So they seek to limit its size, with the goal of someday eradicating it entirely.

But there's a Rebel Branch of alchemists that's fighting to expand the Flaw, and the rebels want Jaden to join them. Jaden has been taught to fear the rebels, but soon she finds herself wondering who to believe.

Masson has created a complex yet logical system of magic for her world; one of the most charming, yet horrifying, scenes in the book is the one in which Jaden realizes where the crystals in the Amber Garden come from. The political intrigue, both between Council and the rebels and within the council itself, rings true.

This is not a fast-paced book by any means, and yet the plot doesn't meander. I enjoyed The Alchemists' Council and would be very interested in reading the next book in the series.

***
I should add that I received an ARC of this book from the publisher.
Posted by Lynne Cantwell at 6:22 PM