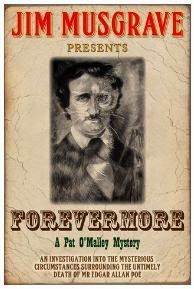 Edgar Allan Poe has always been one of my favorite authors. He is probably best known today for writing "The Raven." But his horror stories are classics, and deservedly so; my all-time favorite is still "The Masque of the Red Death."

Poe is also credited with creating the genre of detective fiction, and it's on this particular hook that Musgrave hangs his hat. Forevermore is narrated by Pat O'Malley, an acquaintance of Poe's, who takes it upon himself to investigate the mystery surrounding the author's death in Baltimore in 1849. But instead of traveling to Baltimore, O'Malley confines his search to the area around New York City, where many of Poe's acquaintances lived. He begins to suspect that Poe was killed in connection with the murder case that Poe used as the basis of one of his detective stories, "The Mystery of Marie Rogêt."

The real-life murder victim, Mary Cecelia Rogers, may have had an abortion prior to her death. Musgrave runs with that, and further emphasizes the Victorian-era discomfort with bodily matters by giving O'Malley an odd sexual dysfunction -- he is unable to be intimate with a woman. It's when he begins to make progress on this problem that he begins to find his way to the truth about Poe's mysterious death.

Musgrave appears to be aiming for a steampunk vibe. I found it only partly convincing; sometimes O'Malley's voice dropped out of the Victorian vernacular and used modern phrases, and sometimes the prose was even more overwrought than a real Victorian would write. Still, Forevermore was worth a look.
Posted by Lynne Cantwell at 6:00 PM