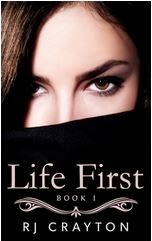 Apparently it's Dystopian Summer here at Rursday Reads, or at least Dystopian July.

Life First follows the story of Kelsey Reed. Her father is a politician in this post-pandemic version of America; her mother died of pre-eclampsia while pregnant with a second child. The fetus also did not survive. In this America, where Life First is law, fetuses are never sacrificed to save the mother's life, and all good citizens are required not only to give blood, but to be organ donors whenever they are a good match for a person who needs a transplant. Refusal to donate when marked is punishable not only by prison, but by a horrible death: the prisoner is killed by having all his or her usable organs taken at once.

Kelsey is marked for a kidney donation. Her best friend suffered serious complications during her donation, and is now in a wheelchair. Kelsey no longer believes in Life First. So she and her boyfriend, with the help of a doctor, hatch a plot for her escape to Peoria -- another country, in what used to be Florida, where no one is forced to give up any body parts to save a stranger. But the plan fails; Kelsey is captured and sent to prison, where her life hangs in the balance.

I found Crayton's plot compelling, and I could imagine America turning into this parody of itself if certain political factions had their way. I wished the writing were a bit smoother, and that Kelsey and Luke didn't feel compelled to call each other by name so often when they're the only two people in the conversation. But those are quibbles. Life First is a fine start to what looks to be an interesting series.
Posted by Lynne Cantwell at 6:00 PM