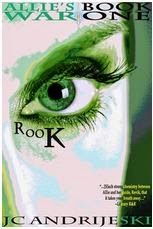 Allie's War is dystopian sci-fi, an alternate-Earth series in which humans only think they're the dominant species.

The main character is 28-year-old Allie Taylor. She works as a waitress in San Francisco, where she grew up as thoroughly human, although she was a foundling and her birth parents are unknown. In this America, humanity looks down on the seers -- another race of beings which humans have essentially enslaved. Or at least, humans think the seers are enslaved.

Then one day, a man named Revik walks into the restaurant where Allie works, and mayhem ensues. He encourages her to come away with him, and for some reason, she does.

It doesn't take long before she discovers that there's more to the seer-human dynamic than meets the eye, and that she's special to both races -- perhaps even humanity's salvation.

Andrijeski has an easy, fluid writing style, and she reveals just enough as the story progresses to keep her readers along for the ride. She has written a number of volumes in this series -- Goodreads shows twelve, including a compilation and three spinoff novels -- but if you're into dystopian sci-fi, Rook is the place to start. You won't be disappointed.
Posted by Lynne Cantwell at 6:00 PM