My Name Is Hardly (My Temporary Life #2) - Martin Crosbie 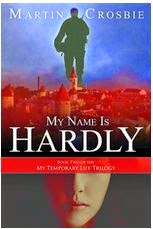 That was a short dystopian summer...although I imagine the Troubles in Ireland were a sort of dystopia for those who lived there when they were going on.

Readers were introduced to Gerald "Hardly" McDougall in Crosbie's first novel, My Temporary Life (which itself will be a Rursday Read, by and by). But you don't have to have read the first book to figure out what's going on here.

Hardly is the son of an alcoholic father, and a short kid who fought off his share of bullies while growing up in Scotland. When he comes of age, he enlists in the British Army, and finds himself stationed in Ireland during the Troubles. Owing to his size, he's often placed with a comrade in some British sympathizer's cramped attic, where they gather intelligence about the movements and plans of the Irish Republican Army. As the book opens, Hardly and one of his pals is holed up in yet another attic, in what they hope will be their final mission. And when he gets out of there, he plans to help his buddy track down the man's sister -- a woman who Hardly has fallen in love with through his brother's descriptions of her.

My Name Is Hardly packs love, hate, suspense, and adventure into its pages. It's a great book. I highly recommend it.
Posted by Lynne Cantwell at 6:00 PM

Email ThisBlogThis!Share to TwitterShare to FacebookShare to Pinterest
Labels: Martin Crosbie, My Name Is Hardly, My Temporary Life, review