Happy Samhain! This week I'm reviewing a book that scared the crap out of me. 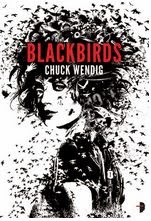 Chuck Wendig is a force of nature. His blog, Terrible Minds, is a must-read for indie authors (and pretty much anyone else with a pulse). And he writes his fiction in multiple genres at once, as if he didn't know any better.

Blackbirds is a case in point. This book could fit into any one of several genres -- contemporary fantasy, paranormal something-or-other, thriller, horror. It tells about an episode in the life of Miriam Black, a woman who has an unusual ability, and one she wishes she didn't have. All she has to do is touch someone, and she can see how the person will die. In living Technicolor. And she knows, pretty much to the minute, when it will happen. It's part of the reason why she's adopted a wandering lifestyle, but it's not the only reason.

One night, she gets into Louis Darling's truck, and learns in her usual manner that he will die in a month, in a horrible way -- and all because he met her. The worst part of it is that Louis is a nice guy. Thus begins Miriam's quest to either get out of Louis's life entirely, or figure out a way to cheat the fate she knows is his.

This is not a book for those with delicate sensibilities. Many of the novel's scenes are visceral in their violence, and Miriam has a colorful vocabulary. But the plot is well-paced and the characters are believable. I was invested enough in Miriam and Louis that I had to keep reading to know how it all turned out.

Blackbirds isn't the kind of thing I usually read, but I'm glad I did.
Posted by Lynne Cantwell at 6:00 PM