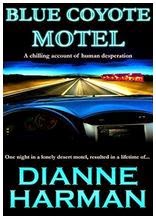 I wanted to like this book, but it just has too many problems.

In a nutshell, the plot is this: Maria, a Hispanic woman who is terrified of losing her looks to aging, meets and marries Jeffrey, a scientist who is developing an anti-aging hormone. When one of Jeffrey's colleagues at the research lab where they all work discovers Jeffrey has been giving the hormone to Maria, both Jeffrey and Maria are given the heave-ho, and sent out the door with a $2 million settlement. They use the money to buy a rundown motel in the middle of the California desert. Maria runs the motel while Jeffrey sets up a test lab in the basement. He comes up with a gas that treats depression, and they test it on the occasional guest by piping it into the rooms. Each of the treated guests consequently leaves the motel feeling terrific; they all go home and turn their lives around. Eventually, though, the drug wears off. When it does, they all happen to  come back to the motel on the same weekend, meet each other, and figure out pretty quickly what's going on. Jeffrey, who is in full-blown mad scientist mode by then, charges them each big money for a continued supply of the drug. And things go downhill from there.

The idea is interesting and original. But oh my goodness, does this book need editing. There is way too much telling and not nearly enough showing. The author repeats details far too many times; for example, we hear that a particular character has earned a specific degree three times in the space of two pages. And the characters deliver their dialog as if they were soliloquies: first one declaims for a paragraph or two, and then the next gives a paragraph in response. Friends, this is not how real people talk.

All that is bad enough, but the author gets numerous facts wrong. Alzheimers, which is a form of dementia, is not the new term for "hardening of the arteries," which is a form of heart disease. The author is confused about how bipolar disease works; she claims people in the manic phase cycle between not sleeping and sleeping ten hours per night (manics sleep very little -- it's people in the depression phase who sleep long hours) and don't shower (again, that's people in the depression phase). I got the impression she pulled up a list of bipolar symptoms online and simply mixed-and-matched.

But what annoyed me the most was her misunderstanding of Native American culture. One of Jeffrey's human guinea pigs is a member of an unnamed tribe. She asserts that once someone receives an "Indian name," they're stuck with it for life. That's not true; many tribes give their members new names to mark significant milestones. She also claims the tribe let her character off the hook for his adolescent vision quest because he was too busy with school, which is unlikely, and that every male gets only one vision quest per lifetime, which simply is not true -- shamans in particular do them more often. Her character is supposedly studying to be a medicine man, but his mentor seems to think he can pick up everything he needs to know in a few months of part-time study, as if he were going to night school for a certificate in shamanism. Sorry, but that ain't how it works.

I cannot recommend The Blue Coyote Motel. It's the first in a series, but with so many significant problems in this book, I will not be bothering with the others.
Posted by Lynne Cantwell at 6:00 PM