This week, I'm reviewing a book that treats Native American beliefs and customs with a great deal more respect than The Blue Coyote Motel does. 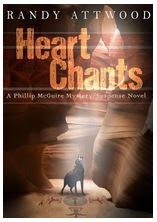 I'm not a big fan of mysteries, usually, but I have enjoyed reading Tony Hillerman's books -- mainly for the glimpses into Navajo culture that his characters provide.

Heart Chants is similar to Hillerman's work in that it's a mystery, although "thriller" may be a more accurate genre description, and that it includes a lot of information about the Navajo. But there's quite a bit more to it.

Phil McGuire is a former journalist who quit the business after a horrific incident in Beirut and retired to Lawrence, Kansas, where he now owns a bar. One night outside the bar, he rescues a Chinese woman from a group of thugs, and gets beaten up in the process. At about the same time, two Navajo women have disappeared from the local community college, and a third -- who is like the missing women in that her father is a singer -- is convinced her friends were kidnapped. She comes to Phil for a place to hide, so she doesn't end up missing, too.

Phil's story runs concurrently with that of a half-Navajo, half-white man who wants the whites in America to go back where they came from. It's not long before we realize this young man is involved with the disappearance of the women, and much of the book's tension comes from watching these two story lines head for their inevitable collision.

Attwood is an old newspaperman himself, and it shows in his ability to tell a story. His characters are genuine -- I liked Phil right away -- and it's clear he did his research into Navajo culture. Although this is the second book in this series, I didn't have any trouble keeping up with either the characters or the plot.

I enjoyed Heart Chants very much, and I'll definitely be looking for more of Attwood's work.